Thinking of purchasing a Pre-construction condo or resale condo? Call us First, we can help! 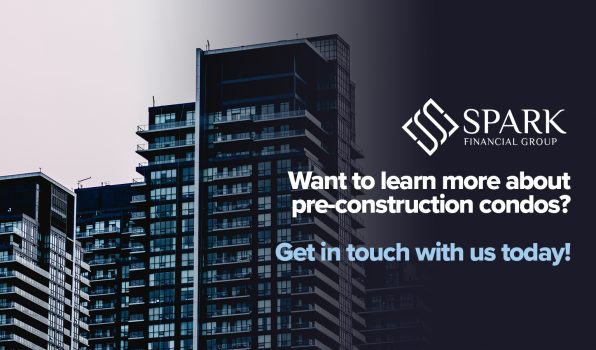 When deciding to purchase a condo, one of the first decisions you will be faced with is whether to go with a pre-construction condo or a more conventional resale condo. While the cosmetic appeal of buying a new condo unit may seem enticing, there are many aspects to consider before diving into the purchase.
Apply Online

One of the main differences when purchasing a pre-construction condo, opposed to a resale condo, is the way it is financed. On a resale condo, you can put down as little as 5% towards the purchase price. On a pre-construction condo, however, you are often required to have at least a 20% down payment. That amount may seem high but the full payment is broken up into smaller installments, made in what is usually referred to as the deposit structure.

Here is an example of a typical deposit structure:

Deposits are generally required to be higher in the beginning of a project, as the bank that is financing the building will have this set out as a requirement. Closer to the completion of the condo, deposit structures become more negotiable, and by simply discussing the fee structure with the builder, you may be able to extend or even reduce your payments.

After you have put a deposit down on a pre-construction condo, you will be given a short period of time to rethink your decision. Often referred to as a “cooling off” period, you can take the time to get your finances in order and make sure you are ready to go ahead with the purchase. You should also have your Agreement of Purchase and Sale reviewed by your real estate lawyer, during this time.
One thing we have to mention is that whether or not you are given a cooling off period, and the number of days that one gives you, varies from province-to-province. For example, the cooling off period is 10 days in Ontario and 7 days in British Columbia. In most other provinces, the cooling off period is builder dependent.

Closing costs are additional expenses that you will need to pay for, between the time you make an offer and the day that you close, including: a home inspection fee, legal fees, land transfer tax, CMHC insurance, HST on CMHC insurance and more.
It is suggested that most buyers prepare to budget and save another 1.5 – 4% of the purchase price of their homes, in order to cover their closing costs. When you buy a pre-construction condo unit, however, that number can be even higher.

When you buy a new condo, you may be subject to additional fees, including:

These additional costs do not apply to every pre-construction purchase, and some may even be included in the sale of the unit. During your cooling off period, have your lawyer review the Agreement of Purchase and Sale to determine which additional closing costs you will incur. It is best to use a real estate lawyer who has experience dealing with the particular building’s developer, as they would be able to anticipate any issues that they have had in the past while closing other client’s deals with that developer.

When you buy a pre-construction condo, you may run into the situation where the builder lets you move into your unit before the rest of the building is done. This is known as your occupancy period and, because the building isn’t complete, you won’t actually be able to start making mortgage payments until after it is. Even though you won’t be making mortgage payments, you will need to pay the developer an occupancy fee for each month that you live there until you eventually take ownership.
Occupancy fees and occupancy periods exist only in Ontario and are governed by the Ontario Condominium Act. The fee structure is designed to only allow the builder to break even on the occupancy fees. Any interest that is made on the monthly interest is to be paid back to you, and taxes are to be recalculated at the end of the occupancy period with any surplus being paid back to you as well.
Because this amount is likely to be cheaper than the rent you may already be paying, you may find it appealing to move in early, and get settled in your building. During the occupancy period the elevators will be in service, however most of the building’s amenities will not be open for use. As well, you should be prepared for there to be a lot of noise in and around the building, as the builder finishes other units and the building as a whole. Generally, the occupancy period is shorter for units on higher floors and for buildings being managed by experienced builders.
The only way around having to pay occupancy fees is to pay the entire purchase price with cash at the date of occupancy, and these terms must have already been put into the Agreement of Purchase and Sale before your cooling off period ended.

At Spark Financial Group, we know there are many great resources available to home buyers and we are determined to make sure you take advantage of them. Our trusted mortgage professionals will help you understand what you are eligible for and ensure that you get the most from your home purchase.

Speak to one of our mortgage experts today!

Online Application
Thanks for subscribing!